"Getting the Truth is sometimes risky, where you have to trust the evidence over what seems apparent or logical." #AuthorJoeKoenig

Press Release on Getting the Truth: I am D.B. Cooper

GRAND RAPIDS, Mich., Jan. 8, 2019 /PRNewswire/ -- Joe Koenig, a forensic linguist, former Michigan State Police investigator, and lead investigator on the Jimmy Hoffa case, has written Getting the Truth: I am D.B. Cooper. The book, published by Grand Rapids, MI-based Principia Media, professionally assesses the evidence that was presented to the publisher by Carl Laurin, D. B. Cooper's lifelong friend, after his own 20-year investigation. In May 2018, Principia Media announced the identity of the infamous skyjacker, D.B. Cooper, at a press conference: Detroit native Walter Reca. In 1971, D.B. Cooper skyjacked a plane and jumped with $200,000, never to be seen again.

Getting the Truth: I am D.B. Cooper will be available at Amazon, local bookstores, and www.TheRealDBCooper.com starting January 15, 2019. The 352-page book retails for $19.95, and an audio version will be available in March 2019.

In his book, Koenig painstakingly evaluates all of the evidence, based upon his years of training and professional experience. As part of his review, he read many FBI reports from the FBI Vault. He looked for consistencies with the evidence, including more than three hours of taped confession by Reca to Laurin detailing his skyjacking details and his post-hijacking adventures; an eyewitness who corroborates and confirms details in that confession; and countless documents that also substantiate the claims.

After spending two years meticulously assessing all the evidence provided by Laurin, analyzing the confession and witness statements, interviewing key witnesses, and comparing evidence and declarations in the confession to the FBI's evidence and reports, Koenig concludes: "I am convinced: Walt Peca, a.k.a. Walt Reca, is D.B. Cooper."

In Getting the Truth: I am D.B. Cooper, Koenig details his investigation and findings, the reasoning and basis for those findings, and provides entertaining and illuminating insight into cold-case investigations. Former FBI Agents, former Federal and State Prosecutors, and former heads of Federal, State, and Local Police Agencies agree with Koenig's conclusion.

The investigation was spearheaded by Principia Media after being approached by Reca's best friend, Carl Laurin. Laurin released his memoir, D.B. Cooper & Me: A Criminal, A Spy, My Best Friend, in May 2018 telling the story of his friendship with Reca. The skyjacking was only the beginning for Reca, as he later went on to become a high-level covert intelligence operative. Principia Media also released an investigative documentary D.B. Cooper: The Real Story.

Presentations on Getting the Truth: I am D.B. Cooper

Here are the scheduled presentations/readings/signings for my new book, Getting the Truth: I am D.B. Cooper. Please join me. I will provide a primer on Forensic Linguistics, read some excerpts, and Dirk Wierenga will provide a short clip of our audible book as well. Book signings will follow: 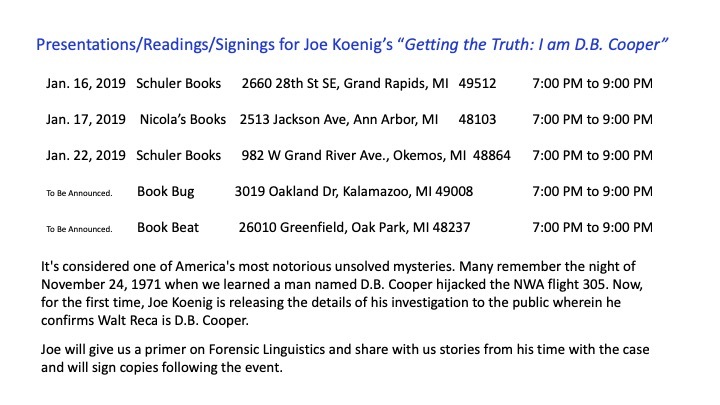 My Analysis on D.B. Cooper at May 2018 Press Conference

Get Joe Koenig's new book, "Getting the Truth: I am D.B. Cooper," at Getting the Truth on Cooper or any bookstore. (or, if you wish to have an autographed copy, click "Bookstore" at top of this page.) 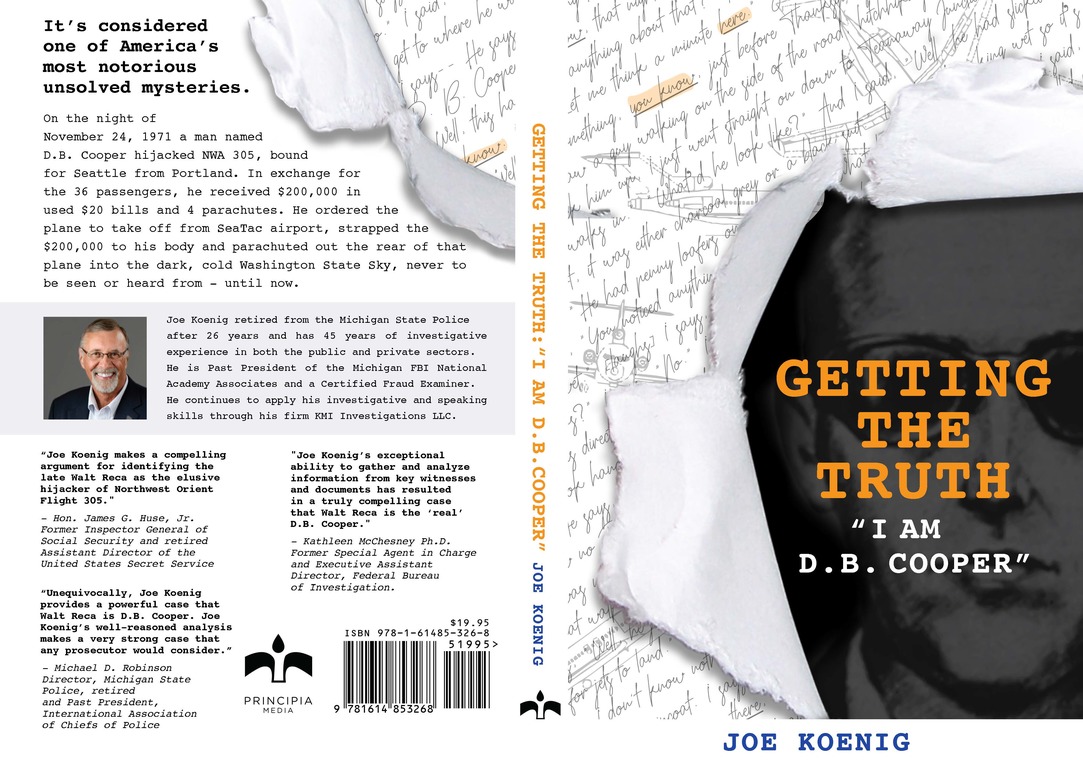